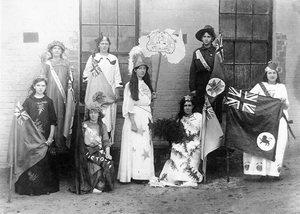 Australia at the time of federation was largely British-born, blended and imported, convicts, British/Irish/Welsh immigrants predominantly, minorities from the rest of the empire, and, of course, Indigenous communities. While we hadn’t yet been constituted as a nation state - it took several decades, really, for that to happen - Federation was nonetheless the moment in which the concept of a nation emerged. It is important to highlight the idea made in the book “What’s wrong with ANZAC? The Militarisation of Australian History (2010; Marilyn Lake and Henry Reynolds with Mark McKenna and Joy Damousi; Sydney, UNSW Press): it so often it is really a military event that is identified with the birth of a nation.  In that book, we argue very strongly, despite all the rhetoric around it, that the shaping and emergence of Australia was formed by issues of fear and anxiety, particularly fear of an invasion from Asia and its peoples.


The Chinese, the Japanese and the Melanesians were all seen as a threat and, of course, there was the concern of the purity of the race. It has to be said that ‘White’ Australia defined immigration for much of the 20th century and at this point in time it was really at a zenith; the White Australia Policy was dominant, restricting immigration through the Immigration Restriction Act of 1901. The slogans of that time very much promoted ‘Australia for Australians’ in terms of keeping communities like the Chinese, Melanesians and Japanese out of Australia: a period of enormous racial intolerance and fear of invasion. Looking at issues of ‘invasion’ today, what we’re talking about here is a different type of invasion, one from the shores of countries not far away from Australia.  White Australia was indeed a denial of the presence of Australia’s original inhabitants and the Indigenous populations were totally absent from Federation; so, by any means, we are not stating that Federation was perfect and its concept was perfect; far from it.  So it is important to reflect on the imperfections on Federation and examine how it came about. Some term the destruction of Aboriginal communities ‘cultural genocide’ and it did destroy a distinctive way of life at that time. So Australia was not free of violence in this period, of course it wasn’t.