Doris Blackburn was born on 18 September 1889, daughter of Lebbeus Hordern and his wife Louisa Dewson, nee Smith. Encouraged by several of her teachers at the progressive school, Hessle, she began her political career at an early age in the Women's Political Association. Doris took up the cause with great enthusiasm including acting as campaign secretary for Vida Goldstein in 1913. Her principal impulse to activism was compassion for the underprivileged and concern for social justice in general rather than women's rights alone. This was strengthened by her marriage in December 1914 to Maurice Blackburn, socialist barrister and Labor Member for Essendon. With the outbreak of World War One Doris fell out with the WPA and preferred to channel her peace campaigning into the anti-conscription campaigns in which Maurice Blackburn was a national leader. Both were also active members of the Free Religious Fellowship led by Rev. Fred Sinclaire which contained so many peace activists that it can be counted as a peace group in its own right.  In 1919 Blackburn, who lost his seat as a consequence of his stand against conscription, founded the law firm that bears his name.

The birth of two sons in the course of the war and the deaths of a brace of dear cousins awakened a visceral hatred of war in Doris, evoked most powerfully in a poem entitled ‘O Woman Awake! which included the following lines

The world is ablaze...
There’s blood on the earth...
There is blood on the sea...
Oh see! It’s your heart’s blood that ran in the veins of your children!
Oh, woman awake!
Rise up from your slumbers and hold them
The blood is your own
It’s the life that you gave to your children.

From this point opposition to war assumed a central place in all her subsequent public activity, beginning with her immediate engagement with the Sisterhood of International Peace, founded in March 1915 under the auspices of Dr Charles Strong, breakaway Presbyterian Minister and founder of the Australian Church.  Strong, an active opponent of the Boer War, had founded the Melbourne Peace Society in 1905, had been inspired by recently a peace conference he attended in England in 1914. He believed that women ‘should exercise great influence’ in the matter of warfare and that they would do this best in a ‘society of their own, managed in their own way’. A few weeks later on 28 April 1915 an international congress of women from Europe, America, ‘enemy’ and neutral countries was held in the Hague, Switzerland, and the Sisterhood immediately established international connections by affiliating with this body which in 1919 became the Women’s International League for Peace and Freedom (WILPF).

Doris was more comfortable in this organisation than the Women’s Peace Army, led by her former mentor, Vida Goldstein.  As Eleanor Moore, the long-time secretary of the WILPF, explained,

In wartime ... when the public is excited and revengeful and Government censorship is severe, the way a thing is said matters as much as the context of the saying. Sometimes it matters more. When public opinion is inflamed there are ways of seeking to influence it. One is to be provocative, taking the risk of reprisal in hope of gaining converts on the recoil. The other is called educational. It studies to avoid the particular phrase which will irritate listeners, and tries rather to draw then into discussion, based on propositions with which, at the outset, all will agree. 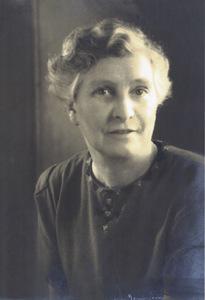