However, as more and more refused to register, the government began deliberately delaying the issuing call-up notices to avoid a public backlash against mass gaolings. Of the original 8 non-compliers in 1967, only one had received a call-up notice by August 1968, and only one gaoled by the end of 1969.[16] The Minister for National Service at the time, Bill Snedden, rationalised the delays on the grounds that “we refrain from prosecution until we are satisfied the young man has had every opportunity to think the thing out”[17], failing to clarify that draft resisters were being given years rather than months to “think things out”, or that by May 1970 there were some 72 non-compliers who were supposed to be issued with call-up notices automatically once they refused to register (since non-compliers were “denied the benefit” of the ballot).[18] The government went even further to avoid mass gaolings by introducing measures in August 1970 to deem pacifists conscientious objectors whether they applied  for exemption or not.[19]

The response of the anticonscription movement was to raise the ante by developing an underground resistance network, something the US antiwar Catholic Priest, Daniel Berrigan, was advocating at that time. Berrigan, one of the Catonsville 9 who went to gaol for destroying draft files, argued “We must break through the myth of ‘accepting punishment as the consequences of our acts’. That’s why the underground is important – it ups the ante, raises the level of resistance. I could no more surrender myself than I could register for the draft”.[20]

Organized by SOS, SDS, the Catholic Worker Group and members of the Moratorium, the Australian underground draft resister network was set up in September 1970, with Ian Turner and Paul Fox initially being supported, and later Gary Cook, Tony Dalton, Michael Hamel-Green, and others.[21] Prominent members of the business community in Melbourne, and many in the wider antiwar movement, provided funding for safe houses or sheltered resisters in their own homes.

The new strategy was to resist the actual implementation of the conscription scheme and its punitive sanctions by going underground. The idea was not to disappear completely but rather to stay in safe houses and then pop up at demonstrations or in places designated as draft sanctuaries, such as student unions and churches, where the police could only arrest us in the midst of community protest or nonviolent blockades and highlight the fact that whole communities were in fundamental opposition to the war and conscription.

The new strategy proved very successful in the ensuing two years, with a particularly notable event being the Melbourne University siege of September 1971. Four draft resisters announced in advance that we were going to take up sanctuary at the union building. On the third day of taking up residence in the Student Union, 150 Commonwealth police staged a dawn raid. Obstructed by a nonviolent blockade of supporters linking arms, the police failed to catch any of the resisters.[22] Other notable events included the spontaneous release of “scarlet pimpernel” resister, Mike Matteson, by 800 Sydney University students, on April 24 1971, using bolt cutters to free him from being handcuffed to two Commonwealth policemen; and Matteson’s successful escape from an ABC studio as he was being interviewed on “This Day Tonight” at the same time as the Attorney General, Ivor Greenwood, who immediately ordered police to the studio to arrest him.[xxiii]

The civil disobedience campaigns that gathered pace from 1968 onwards extended far beyond the draft resisters directly affected by conscription. They were undertaken by wider and wider circles in the antiwar community. Anti-war and anti conscription groups, including DRM, SDS, student Labor clubs, SOS, unions, and the newly formed Committee of Defiance, engaged in multiple forms of much publicized civil disobedience, including numerous sit-ins at induction centres and national service offices, “Don’t register” campaigns (which violated Crimes Act laws against incitement to not register), and the handing out Don’t Register leaflets at the Melbourne GPO (where young men were required to register for the call-up in contravention of a Council by-law (By-Law 418).[24]

From mid-1969, some 8,000 people, including many academics (led by Professors Charles Birch and Charles Martin), politicians, writers (including Patrick White), unionists, students and church leaders, signed up to Committee of Defiance statements urging young men not to register for national service and risking 1 year’s gaol themselves under the Crimes Act (although the Government backed down from prosecuting any of them). [25] Later still, in April 1971, five members of Save Our Sons, the “Fairlea Five”, Jean McLean, Joan Coxsedge, Irene Miller, Jo Maclaine-Cross, and Chris Cathie, were gaoled for 11 days over Easter in Fairlea Women’s Prison for handing out leaflets on conscientious objection in the National Service offices in Melbourne, generating  widespread protests and media coverage.[26] 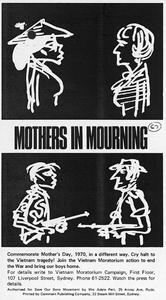 Poster produced by the Save Our Sons movement.