Snapshots: The IWW and Archbishop Mannix 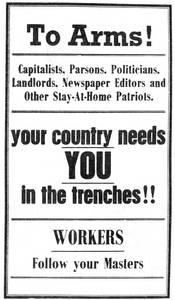 The Industrial Workers of the World, or Wobblies, were outstanding. With clarity and bravery, they opposed the war as a trade war; they exposed war profiteers and condemned the White Australia Policy. Tom Barker of the Sydney Wobblies prepared this great poster in July 1915.

Tom was jailed for a week, but got off on a technicality. Prime Minister Billy Hughes, that renegade wharfie turned super-imperialist prime minister, scapegoated the Wobblies, branding them as German agents. Twelve of their leaders were framed and jailed on a charge of seditious conspiracy. On another charge, Tom Barker was jailed and deported to Chile. 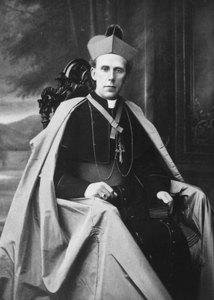 Activists in the peace movement could hardly believe their eyes and ears in September 1916, a fortnight after Hughes announced the first conscription referendum: Archbishop Daniel Mannix, leader of the Catholic Church in Melbourne, made a brief, moderate but definite speech against conscription at the St John’s parish bazaar in Clifton Hill. Then, in January the next year at the opening of a new school in Brunswick, Mannix said: “When all was said and all concessions made, the war was like most wars – just an ordinary trade war.” Influenced by his well-organised working class flock, Mannix was echoing the views of labour leaders.

Extra weight was given to Mannix’ speeches against compulsory military service by two aspects of the policies of Pope Benedict XV; firstly, the Pope was neutral on the war and second, he declared that military conscription was an evil, which made the present war possible, and was prolonging it.

These seven snapshots are but an introduction to the Australian peace movement of the World War I years. While there is no one-volume book or DVD on the Australian opposition as a whole, good books are around. For example, two recent Melbourne books deserve wide readership: Robert Bollard’s In the Shadow of Gallipoli and Geraldine Robertson’s Prejudice and Reason: Some Australian Women’s Responses to War.