Leadership of the Vietnam Moratorium Campaign 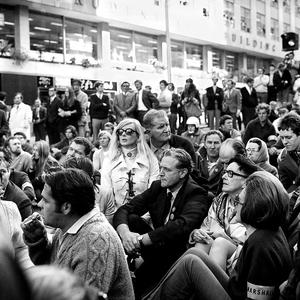 Jim Cairns taking part in the Vietnam Moratorium demonstration in Melbourne, 8 May 1970 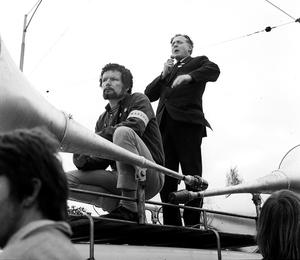 Jim Cairns speaking at the Vietnam Moratorium demonstration in Melbourne, 8 May 1970

Crowd at the Vietnam Moratorium demonstration in Melbourne, 8 May 1970

As chairman of the Victorian Vietnam Moratorium Campaign (VMC), Jim Cairns was at the centre of the struggle between the moderate, established sections of the peace movement and the radical, younger elements as they fought over objectives and tactics. A target of their enmity, he stoically permitted the militants their say providing a release valve for extremist views. Simultaneously, he rebutted scaremongering by conservative governments and the press that equated mass demonstrations with ‘mob rule’. In an April 1970 parliamentary debate, Cairns articulated what the Moratorium movement’s historian, Malcolm Saunders, has described as its ‘manifesto of dissent’:

Cairns’ leadership of the Moratorium combined fortitude with prudence. He was undaunted by the predictions of violence that flew thick and fast in the days before 8 May. When the event proceeded peacefully, he permitted himself a moment’s elation, declaring to the sea of protesters: ‘Nobody thought this could be done … The will of the people is being expressed today as it has never been before.’ But Cairns did not let the moment run away with him: he eschewed any hint of demagoguery. The triumph of May 1970 did inspire him to hope, however, that the Moratorium might prefigure a larger grassroots movement for social change. He was to be sorely disappointed. Against the background of the beginning of the withdrawal of US and Australian forces from Vietnam in the second of half of 1970, the VMC’s purpose waned and dissension worsened between its moderate and radical factions.

A figure of derision over the circumstances that ended his ministerial career in the Whitlam government in 1975, Cairns nevertheless holds a unique status in the nation’s political landscape. No other politician before or since has straddled the parliamentary and extra-parliamentary spheres quite as he did. Deputy prime minister and treasurer in the Whitlam government, he is arguably the most radical politician to have ascended to high office in Australia. Yet he is equally remembered for leading Australia’s anti-Vietnam War movement. When he embarked on that cause in the early 1960s his was a relatively lonely quixotic crusade, but with time a majority of the public came to accept that intervention in the conflict was a folly. And when Cairns led 100,000 marchers down Bourke Street on 8 May 1970, he struck a mighty blow for the right to public protest, enlarging the space for democratic action. These are no small legacies.