During the latter years of Australia’s involvement in the Vietnam War, The Peacemaker became more radical, reflecting the changing nature of protest. The paper supported “non-compliers” who broke the law by refusing to register for National Service, to seek exemption, to obey call-up notices or requests to attend medical examination, or even to attend court. One especially provocative act (in the May-June 1969 issue) was to publish part of leaflet that had been distributed in some capitals and regional centres during the recent National Service Registration period. The leaflet contained unambiguous statements listing the alternatives that young men faced: compromise (“you can forget your principles, take your chances and accept military conscription”); applying for exemption from combatant duties (but they must be aware that in fulfilling non-combatant roles they would be helping “the troops kill more effectively and free others for combatant duty”), or applying for complete exemption from all forms of military service. But, the leaflet stated, anyone who believed that the whole National Service Act was unjust and felt that he “could not in conscience recognize its validity in any way” could not register, because to register was to give the Act validity.

Several distributors of the leaflet in Melbourne had been charged with “publishing an incitement to commit an offence against the Commonwealth Act.” Although the charges were dismissed, the Commonwealth Government was appealing the decision at the time of The Peacemaker’s publication. The paper did not experience any legal penalty for its action.

By early 1969, The Peacemaker was in serious financial trouble, despite having raised the price of each copy from five to ten cents and the annual subscription from one dollar to one dollar and fifty cents in January 1968. Although the editorial committee aimed to produce eleven issues annually, lack of funds had often resulted in as few as four or six issues per year. The January-February 1969 slim, six-page issue, urged in bold type:

WE MUST HAVE MONEY IN HAND BEFORE WE CAN PRINT. Subscriptions and Donations have always, since “The Peacemaker” was first published in 1939, managed to keep ahead of rising costs. Send money now for the next issue (March 31) …

Apologies are due to subscribers for the non-appearance of “THE PEACEMAKER” in January and February. Amongst other reasons, it was due to lack of funds.

IF DONATIONS AND SUBSCRIPTIONS COME IN PROMPTLY “The Peacemaker” will appear at least monthly in 1969 …. It’s over to you, readers.

From 1969 to 1971, although the paper increased from six to eight pages, the number of issues declined to four annually. The last issue (September – December 1971) famously depicted Michael Matteson, photographed while on the run from police. Three pages contained statements by Matteson and Geoff Mullen on why they were resisting the draft. Then it disappeared. 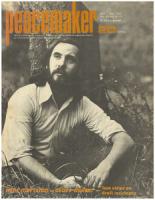 The front cover of the last issue featured Michael Matteson, a non-complier who evaded the police for 14 months during 1971–72.