A week before the first conscription referendum, on 21 October 1916, the “United Womens No Conscription Demonstration” was held in Melbourne. This was one of the most spectacular anti-conscription events of the campaign.

The rally was a joint effort between the Womens Peace Army, the Labor Women’s Anti-Conscription Committee and the Victorian Socialist Party, and had been organised over several weeks.

The rally began at 2:30pm with a march of 4000 women and children through the streets of Melbourne, with several thousand more looking on It started from the Guild Hall (now Storey Hall) and proceeding to the Yarra Bank. The march was led by Madge Gardiner, the 8 year old daughter of Edith, Vice President of the Women’s Political Association. Madge was dressed in white, holding a dove, and marched underneath a banner proclaiming “And a little child shall lead them”. The march included other costumes, and a number of artistic displays and signs on the back of lorries. May Boquest, on horseback, and Cecilia John acted as marshals.

At the corner of Bourke and Swanston Streets a crowd of returned soldiers attempt to disrupt the procession, rushing in and snatching some of the banners being carried. Australian Peace Alliance Secretary Fred Riley had organised a group of supporters for such an eventuality and they tried to restrain the soldiers. Some scuffling ensued and one of Riley’s supporters, fearing for Madge Gardiner’s safety, placed her on his shoulders. Further down Swanston Street some eggs were thrown at the procession.

At the Yarra Bank itself, the crowd was around 30000. At this time the Yarra Bank was a site of protest meetings every Sunday – and in late 1916 most of these meetings were on the conscription question.

Cecilia John opened the proceedings with several songs, including the prohibited “I  raise my son to be a soldier”. Other speakers included Vida Goldstein and Adela Pankhurst. Bella Lavender was originally scheduled to speak but was travelling elsewhere on the day.

Around 30 returned soldiers also tried to disrupt this meeting but again Fred Riley and his supporters linked arms to restrain the soldiers. The meeting concluded successfully. 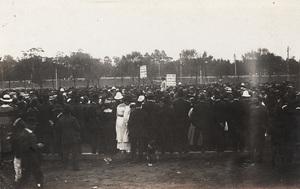