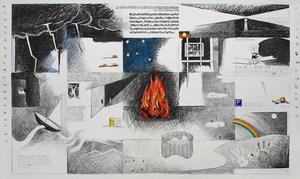 Kelly is an artist and pacifist well known internationally with his art often being part of the dialogue in places in transition from war or oppression to newfound civil society including the Republic of Georgia, Northern Ireland, South Africa and the Basque Country (Spain). He is a recipient of the Coat of Arms of the symbolic city of Guernica (Basque Country, Spain) and the first visual artist to be given the prestigious Courage of Conscience Award (Peace Abbey, Boston, USA) – other recipients include Mahatma Gandhi, Martin Luther King Jr., Rosa Parks, Daniel Berrigan and John Lennon. In 1998 he was invited to create a work for the 50th Anniversary of the United Nations Universal Declaration of Human Rights International Print Portfolio, for which the forward was written by Kofi Anan. His landmark book Art and Humanist Ideals (Macmillan) outlines the contribution of contemporary artists to the dialogue on significant issues of our time.