A “Small  Monument to Tiananmen (Heavenly Peace) Square” evolved while reflecting on the concerns of bravery by individuals which often results in the abuse of their human rights. There are concerns for those who, in many countries, have stood for what they believe and become exiled, imprisoned or executed.  All of the above happened as a result of this series of events.  We all consider the fate of the man who stood before the tank and I also, often, wonder about the fate of the tank Commander who did not have it in his heart to drive over or shoot the lone protester.

This work is to be donated to the People’s Republic of China for permanent installation in Tiananmen Square upon the Chinese Government’s recognition of human rights. 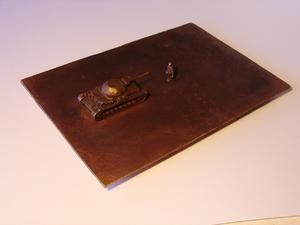