Introduction of Selective National Service during the Vietnam War 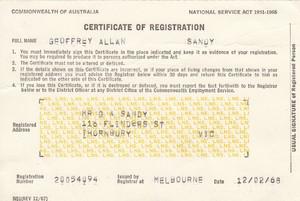 The National Registration Card of Geoffrey Allan Sandy from 1968. He first registered in 1964 and his birthdate marble was selected in the first lottery which was held 10 March 1965. He was granted full emption from military duties as a conscientious objector on 13 February 1969.

First, while national service was not new, it had previously always been universal. An exception was the boy soldier period of 1909-1929. Now it was selective directed at eligible men turning twenty years of age during 1965, but only for those whose birthdate marble were drawn in a ballot. The required number of birthdate marbles to be drawn was determined by the estimated numbers of men required by the military during 1965 and subsequent years.

Second, national servicemen had never been compulsorily assigned to serve overseas. After committing Australia to the Vietnam War, the Government included conscripted national servicemen among the active personnel. A precedent had been established during 1942 when the Commonwealth Government permitted militia units to serve in the South-West Pacific, but this was deemed to be Australian territory. During 1943 militia units were given the option of disbanding and joining the AIF. In 1964 national servicemen (conscripts) were integrated with the regular army and could be compelled to serve in wars anywhere. When Australia entered the Vietnam War conscription for active service overseas became a reality.

The National Service Act (NSA) provided for the arrangements described above. It was opposed by a minority of Australians on three main grounds. Some opposed conscription itself, and especially when it was selective and not universal. Others opposed Australia’s participation in the Vietnam War, and especially after 1965 when large numbers of regular and conscript troops were sent to South Vietnam. Yet others opposed participation in all war as immoral. Persons who hold pacifist views towards war are usually called conscientious objectors. It is this group which is the subject of this gallery.

The NSA provided for an eligible young man who had registered for national service to prove in court that he should be exempted from service in the military because of his conscientious objection to war. He could seek exemption from both combatant and non-combatant roles or a combatant role only.

The NSA did not permit eligible young men to gain a full or partial exemption from national service based on their conscientious beliefs that conscription was immoral and/ or that a particular conflict, for example Vietnam, was immoral. Knowing this a number of eligible men refused to register or undergo a medical under the NSA and sought to have it repealed. This group was referred to as conscientious non-compliers or draft resisters. Conscientious objectors usually shared the beliefs held by the non-compliers regarding conscription and the Vietnam War.