One evening shortly after the June 30 1971 Moratorium Michael Hamel-Green and I were discussing this dilemma at one of the underground ‘safe houses’. We decided to raise the stakes further and developed a proposal which we put to the National Conference of Draft Resisters at Melbourne University in mid-September. The plan was to establish a week long ‘resistance commune’ at the University. The first step was to affirm the status of the Melbourne University Student Union as a ‘draft sanctuary’ through an open student meeting. A packed Public Lecture Theatre the following week strongly endorsed the draft sanctuary motion and invited any draft resister who desired a safe venue to come to the Union building and find sanctuary.

Because it was clear that the government was determined to avoid a public confrontation over draft resistance and conscription in general we had considered the likelihood that the government would simply ignore the challenge and the media might do the same. Therefore it was decided to establish our own media and ‘Radio Resistance’ was born. For several weeks a number of students slaved day and night to build a small radio station and transmitting antennae on the roof of the Union to enable the draft resisters to transmit their message directly to the inner suburban community. We expected that the government would not ignore both the challenge from the draft resisters and the illegal radio station.

The ‘resistance commune’ was publicly announced to the media a few days prior to its commencement and the police were also aware of it, as shown by subsequent actions. The ‘commune’ was to start on Monday September 28th, and continue for a week or possibly longer.

Monday morning saw the beginning of the ‘resistance commune’ with a meeting in the Union at which five draft resisters were present. A program was developed for the rest of the week and media releases, newsletters, and a range of other activities were organised and announced over Radio Resistance.The meeting and sleeping area was on the second floor of the Union and the stairwells were blocked by a mountain of chairs stacked from the ground floor to the second floor to slow down any police attempts while plans to hide the draft resisters were put into action. Other precautions included a motorbike squad continually surveying the streets surrounding the campus to give advance warning of any police action. And of course Radio Resistance was ready to call on local students and any other supporters in the vicinity to come to the Union and provide further assistance. There was even a loud siren placed on the roof of the Union in case there was no time for other measures.

The next day was very similar and the night was spent in meetings, discussions and anxious sleep. At 5 a.m. on Wednesday September 30th, one of the motorcycle patrols reported that a substantial number of police vehicles, a bus and lots of police were gathering a few blocks away. The word went around, precautions were checked, the siren was sounded and the radio transmitted calls for support. There followed an extraordinary series of events which was to seriously embarrass the Commonwealth police and their superiors, right up to the Attorney-General, Ivor Greenwood.

At 6 a.m. 150 police arrived at the Union building main doors and were met by the University Registrar, Brigadier ‘Ding’ Bell who offered them keys to get in. Instead of accepting the keys they brushed the Registrar aside and commenced to smash down the doors. Once having gained entry they raged through the ground floor searching for the draft resisters and the radio. Finding nothing they then turned to higher floors.

While 200 supporters sat on the third floor of the Union (after securing the safety of the draft resisters), the police, seeing the large pile of chairs blocking their passage up the stairs, used bolt cutters to cut the chain that was holding the bottom chairs in place. They were terribly surprised when the chairs fell downwards hitting several policemen. The realisation that they were not above the law of gravity slowed the police down as they exhibited greater care in removing the chairs to make their way up to the second and third floors.

As they reached the second floor many of them spread out to continue the search while a number of senior police continued to the third floor. There they were met by the seated and voluble activists. The Commonwealth Deputy Commissioner of Police, who had flown in especially from Canberra to control operations, now felt it necessary to inform the large group that they would be trespassing in their own Union if they did not leave the building immediately. To his obvious chagrin, and despite his megaphone, he could not be heard above the 200 voices singing John Lennon’s ‘Power to the People’ in a continuous chant. This went on for over an hour while the police frantically searched the building but began to realise their failure to find any draft resisters, two of whom remained hidden in a specially prepared alcove while the other two were spirited off campus at the first warning of the raid.

Throughout the police raid students and other supporters had gathered outside the student Union and had virtually blocked all exits in case any draft resisters had been caught. Eventually the police abandoned their efforts and left, leaving a substantial amount of wreckage in their wake. A student meeting consisting of about 1,000 students was held that lunchtime; it strongly condemned the police actions and voted to demand that the Commonwealth pay for the thousands of dollars of damage done to the building. For the draft resisters it was a substantial victory and showed that the government could not simply impose its will on an organised and determined opposition.

Such activities showing the ability of draft resisters to make public appearances without being apprehended continued throughout the next twelve months, in Sydney as well as Melbourne. They appeared at various events on campuses, at church meetings and even at student exams in the Exhibition Buildings in Carlton.

While the Moratorium Committees started to disband at the end of 1971 the networks were maintained for several years. The anti-conscription movement continued until the ALP won the election in December 1972, whereupon conscription was immediately stopped and imprisoned draft resisters released. 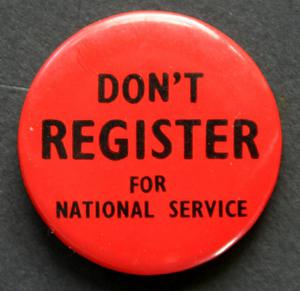