Cole had high hopes for Federation in Australia as the first step in a global order that would bring world peace. He was deeply disappointed that it was tied to a White Australia Policy and campaigned vigorously against the introduction of this policy In his arcade he carried through his ideal of equality and inclusion by for example, writing about the positive characteristics of the Chinese people and running a Chinese tea shop. He employed a gentleman who had been black, but through a disorder appeared to have white skin. He challenged customers to guess the employee’s nationality and published the results, which showed that people could not in practice distinguish him from an Englishman, thereby showing that racism is prejudice and attempting to prove that dark skin is simply a result of living in sunny climes. There is also a delightful story of an encounter with Aborigines on the Murray, where his companion got ready to threaten them, but Cole elicits their help to clear the boat from a snag and ends up giving them joy rides across the river. 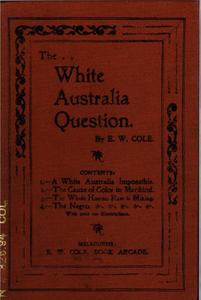