Australia's involvement in the Vietnam War

On April 29th 1965, the Australian Menzies Government announced it would be sending an Australian battalion to Vietnam alongside US troops. As part of its preparations for sending troops to the war, the Menzies Government had earlier announced in November 1964 a “birthday” ballot national service scheme under which 20 year old males would register and the required number of conscripts would be drawn from a twice-year lottery.

The 1964-1972 anti-Vietnam anti-conscription movement was specifically aimed at ending Australia’s intervention in Vietnam and the associated conscription scheme.[1] Opponents of the war were galvanized by the indiscriminate bombing and napalming of Vietnamese civilians, the view that the war was a civil one rather than part of a “downward thrust” of “communism” towards Australia, the perception on the part of many on the left that it represented a form of imperialism on the part of the United States, and the fact that Australia was supporting an undemocratic and repressive regime in South Vietnam. Opposition to conscription focused both on preventing young men being forced into such a war and on the coercive and militarist nature of the scheme itself.

By contrast, the conservative government, mainstream media, and other pro-war sections of the community viewed the Vietnam War in Cold War terms as one of “Communism versus the Free World” in a context where the Soviet Union and China were supporting the North Vietnamese communist government, and the US, Australia and other Western countries were supporting the South Vietnamese government. Even the smallest protest about Australian or US nuclear or war policies tended to be branded by the government and mainstream media of the day as “communist inspired” or “fellow-travelling” with communists. 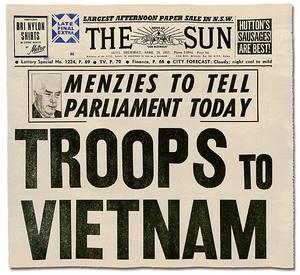