In 1964, Vivienne Abraham took up the editorship of The Peacemaker [PM] for a second time, jointly with her sister, Shirley.  They served together in the post until Shirley resigned at the end of 1968. Vivienne remained as the sole editor until the last issue. PM’s editorial style remained consistent throughout these years, but both the format and the content changed. At the beginning of 1969, the paper’s size was reduced from a broadsheet to a journal format, slightly larger than A4, and the contents focused almost exclusively on resisters to the Vietnam War, whereas at the beginning of the period (1964), most of the content was from overseas.

In November 1964, the Menzies government re-introduced the compulsory National Service scheme. In the months prior to Menzies re-introducing military conscription, PM reported upon many international peace events, including: the Delhi-Peking Friendship March’s unsuccessful attempt to enter China; the US–Cuba Peace Walk; the imprisonment of American peace activist John Papworth; Nelson Mandela’s trial in Pretoria, and Hiroshima Day, observed on the nineteenth anniversary of the dropping of the first atomic bomb. PM’s editors knew that the government was planning to reintroduce military conscription. An item the July 1964 issue’s Editorial stated:

[S]ources in Canberra suggest that selective compulsory national service is likely to be re-introduced in Australia unless the present recruiting drive shows increased results. The scheme may well follow American lines where every youth is required to register on turning 18 and is eligible for service until he reaches 26.

In the first instance, we oppose compulsory military training because we feel it is wrong for young men to be compelled to learn to kill whoever the Government decides is the current enemy. Secondly, we fail to see how increased armies can do anything but increase world tension. What we need, rather, is a relaxation of tension, a lessening of arms and troops and an increase in efforts of goodwill.

PM may have been consciously rebutting the government’s official rationale for reintroducing conscription, which was as security against Indonesian aggression, at a time when Indonesia and Malaysia were involved in territorial disputes.

The Australian government had already committed military advisers to assist the South Vietnamese government in August 1962. When PM’s September issue went to press, the Minister for the Army, Dr A.J. Forbes, was still denying that national service training was planned in the foreseeable future, stating that, “The time could come when national service training [would] become necessary. The introduction of the scheme would be one of timing, related to the resources available, military priorities and the strategic situation.”

PM’s front-page banner headline in the September 1964 issue ran: “Say ‘No’ to Conscription” in bold black type, unequivocally stating its opposition to national service. PM reported that schemes under consideration were likely to be “selective rather than universal,” would “probably be based on two years’ continuous service and three years in the reserve with liability for overseas service and call-up after training,” and that the enlistment age would be “at least 20 to get the advantage of skilled men.” This statement was reinforced by a creed printed in bold type, stating that the Federal Pacifist Council opposed “military training … all killing … teaching our citizens how to kill” and not just “nuclear weapons” but all forms of weaponry. The creed concluded emphatically, “We oppose compulsory military training. We ask you to oppose it, too.”

The Peacemaker also devoted much space to non-war-related issues, such as the “feudal conditions” suffered by Black Americans in southern states of the USA, and campaigns to end similar discrimination against Indigenous Australians by equalising wages and employment conditions and granting them full rights to social service benefits. The paper supplemented information about the National Service Act 1951–1964 (as it was now known) by publishing the War Resisters International’s  and the American Fellowship of Reconciliation’s call for US forces to withdraw from South Vietnam; articles on US conscientious objectors, and as 1965 dawned, debates on war and sacrifice, conscription and conscience and Christian views on peace.

During 1966, there were substantial, contemporary contributions to the anti-war argument, such as an address by the Reverend Terry Lane, a Church of Christ minister from the Melbourne suburb of East Preston, who argued that training to kill was as morally indefensible as killing. Peter Bryant, a self-confessed “non-pacifist”, argued that:

These rational arguments influenced young men who were faced with the decision of whether or not to apply for exemption.

The Peacemaker's focus narrowed in the next few months as the pages were filled with details of the statements, trials and imprisonments of individual Australian objectors. The May 1965 issue published the first testimony by a conscientious objector. Colin Matheson, a Quaker from Canberra, was prepared to undertake non-combatant service “as a medical orderly, stretcher bearer, ambulance driver etc. in order to help save life rather than destroy it.” The following month, the paper reported the first conscientious objector court hearings, when eight young men appeared before two magistrates in Melbourne.  The case of Robin Kitching, the first objector to win an appeal against being ordered to undertake non-combatant duties when he had requested complete exemption, received almost two pages of reportage. Another half page comprised a conscientious objector register, showing the outcomes of 63 cases across the nation. While this emphasis is attributable to Vivienne Abraham, the paper relied on subscribers and the media for material. There were no reporters to go out and collect news, other than volunteers in each state and the already over-committed editors. Vivienne Abraham spent much of her time assisting objectors to negotiate the complexities of the legal system, attending their court cases and taking copious notes.

The details of each case before the courts provide a valuable resource for today’s researchers of the period, with records of names, charges and outcomes of trials, the number of objectors in the legal system at any given time, and a forum for their views. During the later years of this period, PM contained mostly Australian news, although some information about pacifist movements or objectors in other countries still appeared. In summary, the “unusually wide” coverage of world affairs “of interest to pacifists and all peacemakers,” for which Donald Swann, an Anglican pacifist and half of the famous song-writing duo Flanders and Swann, commended the paper during a visit to Melbourne in September 1964, had largely disappeared by the late 1960s. 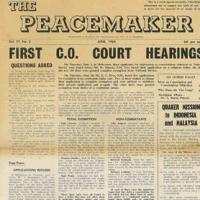