Nuclear Testing in the Pacific 1950s-80s

From the beginning of the nuclear age, the Pacific islands were used for the development and testing of nuclear weapons.

Between 1946 and 1996, the United States, Britain and France conducted Cold War programs of nuclear testing in the deserts of Australia and the atolls of the central and south Pacific. Over five decades, more than 315 nuclear tests were held across the region:

From 1946 to 1958, the United States conducted 67 atomic and hydrogen bomb tests at Bikini and Enewetak atolls in the Marshall Islands. In the 1960s, there were 25 further US tests at Christmas (Kiritimati) Island and nine at Johnston Atoll.[15]

"Starting in 1952, the United Kingdom tested nuclear weapons in Australia and UK Pacific colonies. There were 12 atmospheric tests at the Monte Bello Islands, Maralinga and Emu Field in Australia (1952–57). Under “Operation Grapple”, the British government conducted another nine atomic and hydrogen bomb tests at Kiritimati and Malden islands in the Gilbert and Ellice Islands colony, in 1957-58.[16]

For 30 years between 1966 and 1996, France also conducted 193 atmospheric and underground nuclear tests at Moruroa and Fangataufa atolls in French Polynesia.[17]

In Australia and across the region, people protested against atmospheric nuclear testing, which spread radioactive fallout across inhabited islands and further afield by winds and ocean currents. Later underground testing fractured the base of fragile atolls, contaminating the marine environment.[18]

From the 1950s, churches, trade unions, women’s organisations and customary leaders in the islands opposed these nuclear tests. Networks like Nuclear Free and Independent Pacific (NFIP), the Pacific Conference of Churches (PCC) and the Pacific Trade Union Forum (PTUF) supported self-determination for Pacific colonies and the abolition of nuclear weapons. Protests were diverse, with demonstrations at embassies, letter writing, trade union bans and boycotts of French products.

Others took direct action. In 1957, British pacifist Harold Steele planned to sail a boat into the middle of the British nuclear test zone at Christmas Island. This unsuccessful attempt inspired many others: from the 1970s, the Vega, Fri, Rainbow Warrior and other vessels sailed into Pacific test zones (in response, French intelligence agents sank the Greenpeace vessel Rainbow Warrior in Auckland Harbour).[19] In 1982, Bill and Lorraine Ethell mortgaged their home and took three children aboard the Pacific Peacemaker, to challenge the regional deployment of nuclear-armed US Trident submarines.

In the 1980s, at the height of the US–Soviet arms race, Vanuatu, Palau and New Zealand declared their territory nuclear-free. On Hiroshima Day in 1985, members of the Pacific Islands Forum also signed the Rarotonga Treaty for a South Pacific Nuclear Free Zone (SPNFZ), an important regional contribution to global nuclear disarmament. Australian disarmament campaigners worked to strengthen the Rarotonga treaty, in the face of government attempts to limit its scope to protect US nuclear deployments in the Pacific.[20]

Today, the legacies of nuclear testing continue. Many service personnel who staffed the test sites and nearby Pacific communities are living with adverse health and environmental impacts. Veterans, community groups and indigenous organisations are campaigning for the clean-up of test sites and compensation for health effects. 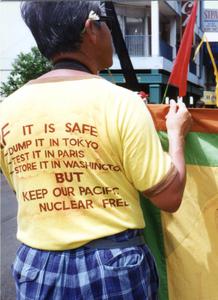 Campaign t-shirt with the slogan "If it is safe, test it in Paris" 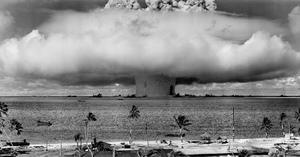 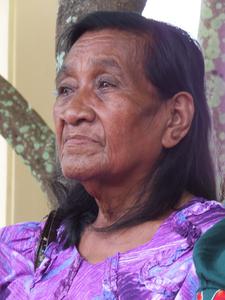