The Treaty on the Prohibition of Nuclear Weapons

During the lead up to negotiations for a nuclear weapon ban treaty, Sue Coleman-Haseldine participated in a national speaking tour, ‘Black Mist White Rain’, focusing on the impacts of nuclear testing. She travelled to four major cities in four days during April 2016 to speak alongside Yankunytjatjara-Anangu women Rose and Karina Lester and former Marshallese Senator Abacca Anjain-Maddison.

In March 2017 Sue travelled to the United Nations in New York to participate and speak [3] at the negotiating conference for the Treaty on the Prohibition of Nuclear Weapons. The presence of First Nations nuclear test survivors from Australia, the Marshall Islands, Fiji and French Polynesia at the conference helped to enshrine the rights of victims and impacted environments in the final agreement. The Treaty was adopted by the UN on 7 July 2017 with the support of 122 nations.

ICAN was awarded the 2017 Nobel Peace Prize for its work raising awareness of the humanitarian impact of nuclear weapons and helping to achieve the Treaty on the Prohibition of Nuclear Weapons. Sue travelled to Oslo to celebrate and attend the award ceremony on 10 December 2017, taking the opportunity to call on the Australian Government to sign and ratify the historic new treaty.

ICAN is a worthy winner of the Nobel Peace Prize – in a short time we have gathered support for a treaty to finally outlaw nuclear weapons and help eliminate the nuclear threat.

The vision was reached in part with so many nations adopting the Treaty on the Prohibition of Nuclear Weapons in July 2017. And we should celebrate this win and the opportunity to work together to stop the suffering and assist countries to make amends to nuclear weapons victims by acknowledging the permanent damage done to land, health and culture.

Unfortunately, the Australian government, along with other first world nations, didn't even participate in the treaty negotiations, and they haven't signed the treaty yet, but over time we feel confident they will.

A lot has changed since I was born. Aboriginal people now have the right to vote in Australia, but still we battle for understanding about our culture and the Australian nuclear weapons legacy. My home is still remote and most of my people still poor. But we are also no longer alone. We have the means and the will to participate – to share and to learn and to bring about lasting change.

Sue continues to defend the earth and sea of her homelands from mining, oil drilling and nuclear waste. Twice a year she “goes bush” with family and friends to care-take for her country, teaching the young ones about the plants and animals. Sue has inspired and mentored countless people over the years, and will continue to do so in her quiet, powerful and undeniably cheeky way. 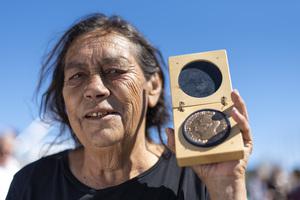