In 1911, three years before the start of the First World War, the Andrew Fisher Labor Government introduced compulsory training for boys aged 12 to 18. The scheme, while designated for home defence, nevertheless generated much opposition and resistance. According to Inglis, 27,749 prosecutions were launched, 5, 732 boys were actually imprisoned in military stockades, and 20,000 parents exposed themselves to possible prosecution in protesting the scheme.[14] 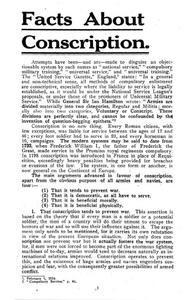 Adelaide Quakers, John Hills and Percy Fletcher, took the lead in forming the national Australian Freedom League to oppose the scheme, with branches established in every state except Western Australia over the period 1912-14.[15] The League produced more than one million anti-conscription pamphlets, arguing that the military training program would have a brutalizing and corrupting effect on boys.[16] The Freedom League actions were complemented by the formation of London Peace Societies branches in Melbourne and Sydney, with the Reverend Dr Charles Strong playing a key role in the Melbourne Peace Society formed in 1905 and similarly campaigning against the “boy conscription” scheme.[17] Equally strong opposition to the scheme was voiced by militant socialist groups and activists, such as Harry Holland.[18] Once the war started, the Freedom League continued to emphasise the importance of conscientious objection to any conscription scheme and distributed handbills in 1916 calling for a “no” vote in the October Referendum, arguing that war is forced on people  “by their ignorance, distrust and suspicion of one another” and that to vote yes would be “declaring in favour of the methods that have brought this war upon the world”.[19] The Freedom League, London Peace Society, and Australian Socialist Party anti-conscription campaigns that began before the war in response to the “boy-conscription” scheme, coupled with the civil disobedience actions of parents and boys themselves in resisting the scheme, contributed importantly to increasing public awareness of the impacts and implications of war and conscription at a time of heightened fears and war hysteria across Australia. It is significant that not only did the wider anti-conscriptionist movement win the two referenda on overseas conscription but the Freedom League and other pre-war campaigns against the “boy-conscription” scheme also met with ultimate success when the Federal Labor Party abandoned support for the scheme in 1919 and abolished it when the Scullin Labor Government came to power in 1929.

Opposition to conscription in the course of the war

The opposition to conscription in the course of the war emerged from diverse groups and figures, all playing important roles in their various spheres of influence within the Australian community. One was within the trade union movement. Another was within the governing Labor Party itself. A third was amongst women’s groups and organizations. A fourth came from antiwar stances and actions taken by the International Workers of the World (IWW), Australian Socialist Party, and other socialist groups. A fifth was the stand taken by the prominent Catholic prelate, Archbishop Daniel Mannix.