I. Cecilia Johns and a Banned Song

The Women’s Peace Army had a favourite song, which the government tried in vain to ban, namely ‘I didn’t raise my son to be a soldier’ (and which was sung at the evening this presentation was held). Here are some lines from the proscribed song:

I didn’t raise my son to be a soldier,
I brought him up to be my pride and joy.
Who dares to put a musket on his shoulder,
To kill some other mother’s darling boy?

The nations ought to arbitrate their quarrels …
There’d be no war today,
If mothers all would say;
I didn’t raise my son to be a soldier.

The song and the women activists stressed that it was not fear of battle that made a conscientious objector to war but fear of killing other human beings. Holders of this opinion were mocked and persecuted. On one occasion in Brisbane, Cecilia Johns, a superb contralto, sang the banned anthem of the Women’s Peace Army to a meeting of 1000, and the police did not dare arrest her. 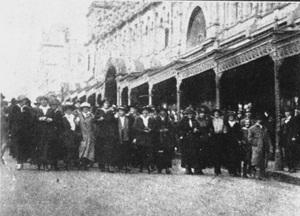 At Richmond Town Hall, on Monday 24 September 1917, women’s groups under the leadership of Adela Pankhurst and Jennie Baines, held a meeting in protest at food shortages, high prices and low wages related to the war. They also smashed windows at grocers Moran and Cato, and butchers Angliss & Co. These food riots are better understood when seen in the context of the huge railway strike in Sydney the same year.

The government responded by swearing in 400 special constables with batons and badges to foil a demonstration two nights later in Smith Street, Collingwood. For their just complaints that the burden of the war was not being shared equally, the women were roughly treated and their leaders jailed. 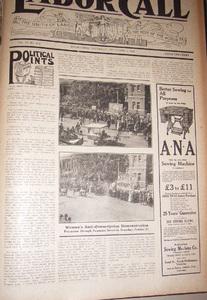 V. The Evening Echo from Ballarat

During the 2016 conference on the history of the Australian peace movement, Anne Beggs-Sunter drew attention to the almost forgotten but crucial national role in the campaigns against the war and against conscription of the twice-daily Ballarat labour paper, The Evening Echo. Sadly, among all the treasures now available on the National Library’s Trove site, The Evening Echo has not been digitised.

The mainstream media, then as now, were pro-war. The Ballarat Daily, edited by future prime minister James Scullin, withstood the War Precautions Act and was forcefully anti-imperialist. Other newspapers were also crucial to the peace movement: Labour Call, Vida Goldstein’s weekly The Woman Voter, the Wobblies’ Direct Action, The Australian Worker edited by the brilliant Henry Boote and the Catholic Advocate were among the most important.