Edward Cole was a man of his times and it is possible to find some of his writing quaintly Victorian. But his global idealism combined with forthright activism made him in some ways remarkably modern. For example his published writings include references to women as angels and enjoins them not to become like men, attitudes that suggest he would have little time for the suffragettes. However, he did believe in universal suffrage, gave his wife power of attorney to take care of his highly lucrative business when he travelled and made his daughter a trustee of his estate. Further, much to the amazed shock of gentle society he advertised for a wife in the newspaper, a kind of precursor to internet dating, asking for people to recommend a suitable person. In the event he respected the intellect and initiative of the woman who answered on her own account and chose to marry her. 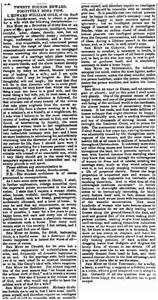