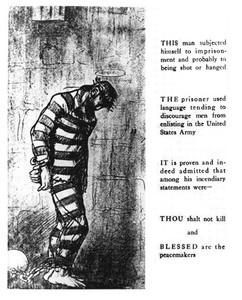 'Blessed are the Peacemakers' by George Bellows(1 July 1917)  is an  anti-war cartoon which depicts Jesus with a halo and in prison stripes alongside a list of his “seditious crimes”.Christian pacifists identify with its strong message of peace. 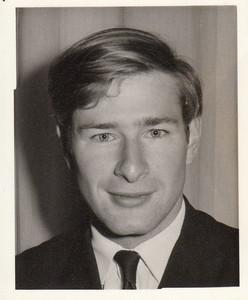 Geoffrey Allan Sandy aged 23 years (1967) applied for and was granted full exemption from military service on the grounds of Christian pacifism on 13 February 1969.

Geoffrey Allan Sandy sought a full exemption based on Christian pacifism. Like many other conscientious objectors he was opposed to the Vietnam War, which he considered to be immoral and that conscription was a violation of individual liberty. However, his application could not be based on the latter two grounds. Geoff was a member of the Church of England in Australia.  His birthdate was selected in the first ballot on10 March 1965. He applied successfully on 27 May 1965 for deferment whilst he completed his University studies. During 1966 Geoff travelled overseas to India and then in 1967 to New Zealand. He successfully sought permission from the Commonwealth Government for both trips as was required under the NSA. Upon successful completion of his University studies he was required to attend a medical examination 16 October 1968. He attended and passed the medical examination. On 21 November 1968 the Commonwealth Government notified him he would be called-up on 29 January 1969. He formally made application for registration as a conscientious objector 30 November 1968. Geoff stated in his application that taking part in war (combatant) or support of war (non-combatant) was immoral for the Christian. His court hearing was at the Court of Petty Sessions in Melbourne on 23 January 1969. Geoff’s father, who served in the RAAF during WW2, gave testimony that his son’s pacifism was of long-standing. Magistrate LSF Smith was hostile to conscientious objection and Christianity. He initially dismissed the application. Both the applicant’s legal counsel, Alf O’Connor, and the state’s legal counsel N Gregory, remonstrated with the magistrate stating that the case had been proved. The magistrate responded by changing his mind and granted the applicant full exemption.

Bruce Reginald French was a schoolteacher and a member of the Baptist church. He changed his plea from full exemption to that of combatant duties only at the Devonport Court Tasmania on 7 February 1970. The magistrate PG Crisp advised Bruce to consult a solicitor on the matter. Reginald indicated he wished to continue with the application. He stated that his objection to combatant duties was based on his religious beliefs. Part of the exchange between Crisp and Bruce was reported. French: My Christian beliefs convince me that life is sacred and therefore the only acceptable form of defence is in terms of constructive aid and mutual understanding. Crisp: How do you meet aggression? French: I am prepared to prevent aggression starting. Crisp: If our shores were attacked what would you do? French: Diplomacy would be a more effective means of defence. I would not kill. I can say that categorically. Crisp: Would it outrage your conscience if asked to kill? French: Yes, I have felt this way for at least 6 years. The magistrate asked Reginald on what authority he based his antipathy to war. He replied that his beliefs were based on the Old and New Testaments. The magistrate stated that he was satisfied it would be outrageous in his present state of mind for him to be asked to kill.

Geoffrey Phillip and Peter Raymond Whale were identical twin brothers from Roseville New South Wales. They were members of the Church of England in Australia. The both applied for full exemption from military duties on the grounds of Christian pacifism. The Stipendiary Magistrate CS Rogers dismissed their applications in March 1968. He ruled that their religious beliefs did not prevent them from taking part in non-combatant duties. Geoff and Peter appealed the decision. It was heard by Judge Hicks in the District Court at Sydney. The judge gave a reserved judgement and within it he stated that the applicant’s beliefs differed from their church. In this he made two errors. First, the judge was required to determine if the beliefs were genuinely held and not whether their beliefs differed from the church they belonged too. Second the Judge was apparently unaware of article 37 of the Articles of Religion of the Church of England.  The brief reference to war states that a Christian may bear arms not that a Christian must bear arms. Subsequently, Hicks granted a full exemption to both men on 25 June 1968.