Sue Coleman-Haseldine’s activism on nuclear issues began in 2005 when she joined the Australian Nuclear Free Alliance, [2] of which she is now a Co-President. There she met with other Aboriginal people impacted by the nuclear fuel chain and learned more about the long-term harm caused by radioactive fallout. Members of ANFA have led many campaigns against uranium mining and nuclear waste, including the successful campaign to prevent a high-level international radioactive waste facility in South Australia in 2016.

In 2014, Sue travelled overseas for the first time in her life to speak to 158 governments at the Vienna Conference on the Humanitarian Impact of Nuclear Weapons. Her testimony told of the effects of the nuclear testing program on Aboriginal land, culture and people.

The Government was no good at ensuring everyone was safe, Australia was even more racist then. At this time, Aboriginal people didn’t even have the right to vote. The government didn’t really care what happened to Aboriginal people. Many people died and became sick in the immediate test areas. So did the animals.

We are telling the story so that our history is not forgotten, but also to create a better future for all people, all over the world. This is why we want nuclear weapons permanently banned and the uranium that can create them left in the ground.

The future forever belongs to the next generation.

Sue was awarded the South Australian Premier’s award for excellence in Indigenous leadership in 2007 and the Jill Hudson Award for Environmental Protection in 2018. She co-authored, with Marcina Coleman, Nguly Gu Yadoo Mai (our good food), an educational guide to the bush foods of far west South Australia. 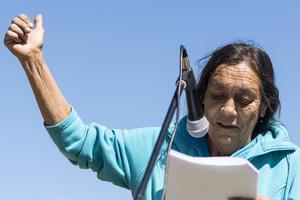 Sue Coleman-Haseldine speaking at the Nobel Peace Ride event at the Australian Parliament House on 20 Septmebr, 2018.