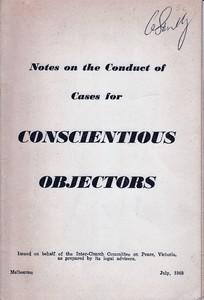 Copy of the front cover of a booklet issued during July 1968 on behalf of the Inter-Church Committee on Peace of Victoria. The booklet provided much needed information and advice to those considering applying  to be registered as a conscientious objector under the 1964 National Service Act. 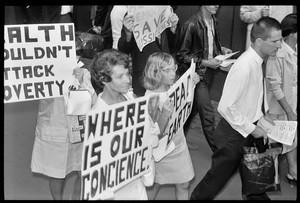 'Where is our conscience' is prominent in an anti Vietnam war demonstration at Martin Place Sydney 1965.

Conscience is part of the human psyche. It influences the moral behavior of a person. Specifically, conscience determines whether an action is considered to be right or wrong.  A person’s conscience is informed by the belief system which is held by that individual. The belief system in turn is influenced by many factors. These usually include religious, humanist and philosophical. Conscience can engender emotions like guilt, shame or remorse in a person who engages in behavior considered wrongful. Similarly conscience can engender emotions like pleasure or a sense of wellbeing in a person who engages in right behavior.

A conscientious objector is a person who objects to engaging in specific behavior because it is against that individual’s conscience. The objection is likely to be strongest when an external agent is attempting to mandate behavior considered wrongful. Conscription for war is an example.

A conscientious objector who believes that violence is immoral is a pacifist. This rules out killing other human beings. This may include participation in war, abortion, capital punishment and self-defense. The conscience of others may allow participation in a just war or a war of liberation or killing in self-defence.

The 1964 National Service Act (NSA) recognized persons who had a conscientious objection to all war, that is pacifists. Provision was made for them to apply for exemption from combatant duties or from both combatant and non-combatant duties. The proof of a person’s conscientious beliefs was tested in a court of law.

Over time the legal determinations of the courts helped clarify a conscientious belief as something that was deep-seated and compelling. If the belief was long-held this strengthened the chances of an applicant’s success in gaining an exemption. This is now reflected in the current (2019) legislation which was strongly influenced by the experience during the 1960s.